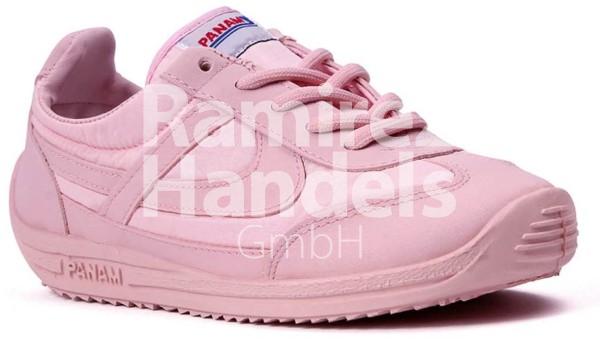 PANAM Sneakers ROSA Europe Size 37 ( MEXICO SIZE 25). Panam is a Mexican company that has been popular for over 60 years. Those of you who were children in the 80s and 90s will most likely have owned one of their trainers and the most likely ones were the classic blue 084 champion. But who created the brand and what is its history? Here we tell you.

In 1962, Producto Auténtico Nacional Mexicano (Panam) was founded and was born from the idea of the Melem and Perez family, who thought that Mexico could have a type of tennis shoe that would fit in with world trends. The Olympic Games in Mexico in 1968 boosted the brand and the use of its products among consumers.

The first factory was set up in Naucalpan, in the State of Mexico, however, after a fire the company had to move to Cuautitlán Izcalli, in the same state, where the facilities remain to this day.

In 1967, the characteristic P logo was introduced for the first time on the sides of the tennis shoes, being the 084 model 'Campeón' (Champion), which is still today a standard and part of Panam's identity.

The original idea of the brand was supposed to be to offer a casual and accessible option, but its popularity and growth was such that in the 80's and 90's Panam became the official tennis shoes for primary schools in Mexico.

This helped the company position itself as a popular phenomenon among young people, backed by its low prices, quality and comfort, becoming the icon of a generation and an important part of the memories of student life. However, it was not all plain sailing, and in the 1990s the company disappeared.

Panam, how it survived the crisis

Despite the fact that in the 90's Panam tennis shoes had difficulties to survive, due to the entry into force of the Free Trade Agreement (FTA) in Mexico, where several sports footwear brands such as Adidas, Vans and Puma arrived in the country, the company survived.

At the beginning of 2000 Panam decided that it was not time to hang up the tennis shoes, transform or die was the decision to take. It decided to change its marketing strategy, restructured its production, styles and new designs, with the aim of satisfying the new young people and placing itself once again in the taste of consumers.

From that moment on, Panam became a retro footwear brand, in keeping with the memory and memories of children who, during primary and secondary school, experienced great moments in the company of tennis shoes.

In 2003 Panam opened the first of its shops, remember that before that the product was marketed only through shoe stores in Canada; by 2009 they implemented the franchise model with a profit margin of between 35 and 40%, with sales increasing 10% year after year.

By 2013 it decided to open exclusive shops in various parts of Mexico and to export its tennis shoes to Central America and Europe through e-commerce. It currently has 700 employees who manufacture 280,000 pairs of tennis shoes per month, 3.4 million pairs per year. 100% of the materials and processes are Mexican, from the raw materials to the craftsmanship.

Today Panam has more than 160 shops throughout the country, one in the United States, and through exports it has a presence in countries such as Guatemala, Germany, Spain, Colombia and Belize.